Versailles is so much more than that gaudy gilded monstrosity at the other end of of town.  Take the road from my house to the Montreuil train station, for example.  Walk up past the community center, take a left away from the Sainte Geneviève high school, and then slow down and start looking at the houses on both sides of the boulevard de la République. Really look because each one is unique and a feast for the eyes.  Do this a few times and you'll start to see common elements that unite them all and make this one of the most charming streets I have had the pleasure to walk. Most of them are what are called maisons en meulière. 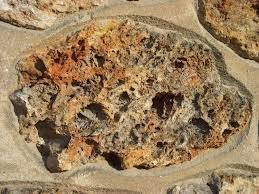 What is meulière?  It's a type of stone that is pretty common in this area and it was used for two things:  millstones and houses.  Unlike the smooth cut stones (pierre de taille) that grace many of the grander buildings in the Paris region, meulière is irregular, multi-coloured, and rough.  It has holes like Swiss cheese and every time I get close to it, I want to run my hands over it.  (If there is a geologist reading this, please jump in and give us an expert view.) 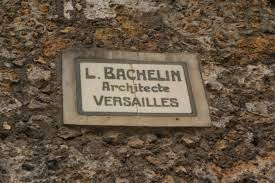 The houses built with this type of stone on the boulevard de la République were constructed in the early years of the 20th century.  In contrast to the roughness of the meulière they used brick, cut stone,  faïences, and iron and woodwork to give each house a touch of something special. "Art Nouveau" decor says one of the articles I read. On some of them you can see the name of a very well known Versailles architect "Leon Bachelin" on a little discreet plaque somewhere on the facade.  Bachelin is credited with the invention of the typical "maison bourgeoise versaillaise".  One source I found said that he designed these houses for wealthy Parisians who wanted houses in the close suburbs.  Apparently a hundred years ago Versailles qualified as "the country" for these folks.

Most of the buildings are set back from the street with a little courtyard in front and, I assume, a much bigger garden in the back. Today you can't see as much as you might like because some of the owners past or present have put metal plates over the classic wrought iron fences separating the front garden from the street.

I am a terrible photographer and I couldn't possible do these houses justice but I did find this Flickr site that does.  I invite you to have a look.  There is also this very fine documentary (about 10 minutes) from France 5.

I love these houses.  However, if we had gone looking for one to buy two years ago, we would have suffered instant sticker shock.  They are very expensive, especially in the Montreuil neighborhood.  Here is a link to one that is one the market right now for the princely sum of 1.5 million Euros.  Some nice pictures though and, hey, one can always dream, right?
Posted by Victoria FERAUGE at 12:36 PM