Just before the end of the school vacation the younger Frenchling proposed a trip into town to see the Palais de la découverte.  This is a science museum in the heart of Paris and my daughter has been there many times on school trips.

The weather could have been better that day but it was a still a nice ride into town.  Versailles is not that close to Paris but we are right smack on the RER C line which goes from the Versailles Castle straight into the center of the city (Pont de l'Alma, Champs de Mars/Tour Eiffel). 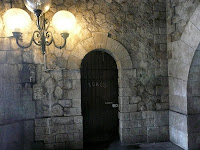 Our stop was Invalides which is usually just a transfer point for me into the Paris metro.  As we walked through the train station to find the right exit I saw parts of it that I never seen before.  Some really lovely stonework, old doors and grills.  This station is right next to the Seine which occasionally overflows its banks and seeps into the station and even onto the tracks. 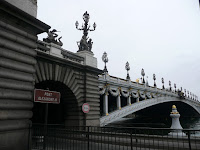 We exited right under the Pont Alexandre III one of the largest and gaudiest bridges that cross the Seine.  You either love it or hate it. It was built in 1900 for the World Fair and its one of several monuments in that area that survive from that period - the Grand and Petit Palais are two others. 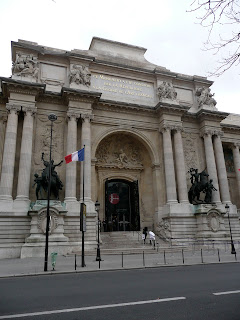 The Palais de la découverte is in the 8th district on Franklin Delanor Roosevelt Avenue and opened in 1937 in one of the wings of the Grand Palais.  It's quite an impressive building and if you think the outside is amazing, you will be stunned by the interior.

Our area of interest that day was the Astronomy section.  The younger Frenchling is fascinated by theories of the origins of the universe. And of course we had to check out the planetarium as well.  The show was good - very practical in the sense that the presenter tried to help the audience reliably find some of the more obvious and interesting objects in the night sky.

After the show we strolled around and stumbled on a presentation about radiation given by a very enthusiastic young French scientist.


After our visit we strolled around the neighborhood looking for a good place to eat.  Here are some pictures I took as we walked around.  I was very surprised to find this bust of Champlain, the "Father of New France" (aka Quebec). 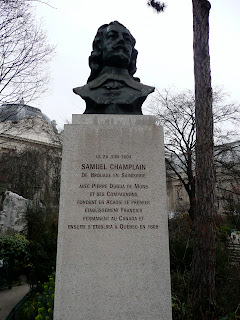 And this monument to the the Russian soldiers who fought on French soil in the first World War. 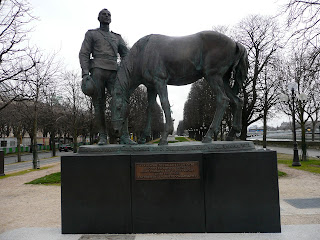 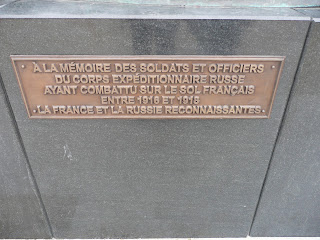 Posted by Victoria FERAUGE at 9:00 AM

i like your blog on travel and blue card