The Flophouse in Germany - Fast Trains

The Flophouse found itself in Mannheim, Germany this weekend. 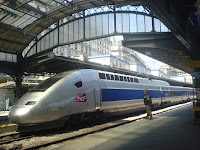 We were outbound on the TGV (the French fast train) from Paris.  Due to a technical glitch the departure was delayed by 30 minutes and when we finally pulled out of the station, the train actually lost power and stopped dead on the tracks.  Eventually the magicians at the SNCF got it moving again and the rest of the ride was uneventful.   A mere 3 hours later we were in the center of the city.


The first stop (and our first priority) was lunch.  We ate some excellent Thai food at a chain called Yam Yam.  I was in heaven - service was fast, food was tasty (could have been spicier) and the Thai beer was very welcome after sitting in a hot train for the better part of the afternoon.

Then we were off to the University of Mannheim for one of the simplest and classiest graduation ceremonies I have ever experienced.  It started (and ended) on time. O, miracle. The speakers were brief and modest.  A very talented string quartet played Mozart.  There was just enough champagne at the reception after for us all to become quite gay but not enough to fuel serious misbehaviour.

The rest of our time was spent walking around the city, having dinner and dancing until 3 AM.  Mannheim is a lovely city.  Nothing garish or overtly touristy - just quiet elegance.  The city has a fascinating layout which is very similar to what you find in Seattle with numbered streets intersecting named streets (5th and Seneca, for example) - a grid system which makes it very easy to navigate.  Our hotel was on N6 and even after copious amounts of beer, it was impossible to get lost.

But the very best part of the trip was inbound (Mannheim-Paris).  For the very first time in my life I got to ride a German fast train and it was stunning:  spacious, comfortable, big windows, fabulous service.  We sat up front (seats 94 and 96) in the first car and I was floored by the fact that there was nothing but clear glass separating the driver from the passenger side and we could see the engineer and the cockpit which resembled something out of Star Trek.  Here's a photo I pulled off the Net: 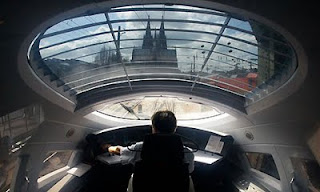 Oh, was I impressed and I wasn't the only one.  Quite a few folks came up from the other cars just to get a peek.  I may have to plan another trip to Germany (maybe to Frankfurt) just so I can do it all again. :-)
Posted by Victoria FERAUGE at 9:54 AM