Easing Back Into America

I have had yet another salutary lesson as to why "living in the wreckage of the future" is not only futile, it's downright dumb.

I flew out of Charles de Gaulle airport Monday morning on a Delta/Air France direct flight to Seattle.  First surprise came when I was upgraded to Economy Comfort - something I only realized when I actually got to my seat and saw that I had space.  I was so delighted I grabbed the nearest flight attendant and said "Thank you!'  We got to talking in that easy way Americans have of chatting and exchanging information and it turned out that she has a family member with breast cancer.  For the entire flight this very nice woman made sure that I was comfortable, checked up on me several times during the flight and even brought me some hot tea. 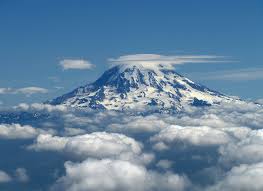 The other members of the cabin crew were equally good.  The announcements were few but pertinent and rather droll.  At the beginning of the flight they pointed out that we were flying on a Boeing 767 "Made in Washington State."  At the end of the flight as we flew down the corridor between the mountains, they made sure we saw The Mountain (Mount Rainier) in all its glory.

The food was great.  The in-flight entertainment system had a lot more choices than remembered:  movies, HBO specials....  Caught part of season three of Game of Thrones, discovered Mildred Pierce and laughed for over an hour watching a Chris Rock special.  I'm a huge fun of the last.  I'm not sure this would make sense to American homelanders but listening to him reminded me of all the reasons I like my country of origin and my compatriots.  Rock is irreverent, crude, politically incorrect, wicked smart and oh so right about a great many things.

Going through immigration was just fine.  The border officer didn't bat an eye when I told him I lived in France.  He laughed when I replied to his question "Brought anything?' with "Actually I'm planning on doing all my shopping here and taking it all back to France."  And when he asked the purpose of my trip and I said, "Seeing my Mom,"  he smiled, handed me my passport and said, "Welcome home."

Now if we could just clone this guy...

My parents picked me up at the airport and, as promised, I had a very soft landing.  Before I knew it we were in Phinney Ridge getting out of the car and I was planted on the couch in the kitchen gulping down a fresh peach smoothie (my Mom has come a long way from those ghastly tofu milkshakes she made me as a child) and eating the elder Frenchling's chocolate chip cookies.

Got up at 5 AM this morning, made coffee and have been perusing the stacks of books scattered all over the house.  If I'm up to it this morning I plan to head over to Two Birds Tattoo to talk to Tara about my next bit of body art.

All in all it's good to be back for a visit.

Posted by Victoria FERAUGE at 3:11 PM

Glad you had a great trip.
Enjoy your time with your parents.
Yes, I like that feeling of coming home!

Victoria, I so enjoyed this post, and this made me cry; ..."And when he asked the purpose of my trip and I said, "Seeing my Mom," he smiled, handed me my passport and said, "Welcome home."
..."

My mom is not alive in the US anymore, but it is only because of family that I returned to the US on visits. Weddings, funerals, graduations, reunions, etc.

But now, very soon, I will give up my birthright, my US citizenship - which is inextricably tied up in my mind and heart with my family and my history. Even though we left when I was very young, we went back every year to visit family and friends. I always liked driving over to the other side and seeing the American flag, and hearing US voices, and seeing people who looked and spoke like my family, as soon as we arrived.

But now, that is impossible. I cannot justify to my Canadian family why I should keep the status that is costing us peace of mind, and the ability to use Canadian government savings, save for my child's education, and the ability to do future planning with my spouse. The US causes me to report my non-US spouses' private, non-US banking, and incur growing accounting costs annually. Accountants and preparers here have stopped doing US taxes since last year. There are very few locally who will, and they are very expensive. The burden and risks are just too great, and the US too capricious and punitive towards those of us who moved or were born outside its borders.

I did not hold on to my US citizenship for economic reasons. I owe the US no taxes and never have. But US policy and behaviour is forcing me to give it up. When the consul asks me if I'm doing so voluntarily, if I want to relinquish successfully, I cannot tell what is honestly in my heart - that it is the US government itself that is co-ercing me into giving up my US birthright.

I must choose between my sentimental feelings towards the US and the current and future wellbeing of my Canadian family.

I feel assaulted by the US behaviour of the last few years. I paid thousands to demonstrate int the manner prescribed, that I owed zero to the US - something that was entirely obvious when looking at my paltry casual part-time earnings and the taxes paid to Canada. It wiped out more than two years of my wages to do so in the manner demanded by the US. All my accounts were legal and registered with my Canadian tax identifying number.

If I were to keep US citizenship now, it would be like choosing to remain in an abusive relationship - and rewarding the abuser. I could never respect myself, and neither could anyone else who knows what we have gone through for the last two years.

Even if I were to somehow reconcile keeping US citizenship, now, if I were welcomed 'home' when crossing, I could never feel the same warm sentiment again. The US has officially tainted and ripped away the sentiments I had for it.

No, I can never go 'home' again, because my US 'home' was an imaginary place in my heart that no longer exists.

Glad to hear you had a good trip. What you experienced on the plane and going through Immigration ("Welcome home") is why I find it so very hard to think about giving up my American citizenship.
Enjoy your stay in our homeland.

Peach smoothie,chocolate chip cookies and Two Bird tattoo. Does life get any better?

Do we get to see the tattoo or will it be hidden in an unmentionable spot?

Yes, can we please clone that border agent? He just sounds perfect. No one has ever said, "welcome home" to me before at the border!

@Christophe, It is nice. When I got up on Tuesday morning there was fog and I could hear the seagulls and the air smelled of the sea. That never happens in Versailles :-)

Anonymous, Thank you so much for your comments which sums up so beautifully why our situation is so heart-wrenching. Frankly, I'm with you and I'd choose my family over my country. But damn it I'm going to fight as hard as I can until I absolutely have to make that choice. Graffy was dead on when she said that the US was turning her 6 million goodwill ambassadors into 6 million ill-will ambassadors and I'd say that it goes well beyond Americans abroad as our friends and families in our host countries are equally shocked that this could be happening to America's own citizens.

@Catherine, I think it's only happened to me two or three times in the 20 years I've been abroad. I was talking to Arun on Facebook and he said that the US is the only developed country he knows that asks its own citizens the purpose of their visit. Shouldn't being a citizen and wanting to visit be good enough? That really made me think...

@Christophe, When you go back to France are you asked why you are visiting France?

@Victoria. I've NEVER been asked why. They just look at my passport and stamp those of my wife and kids. But when a "mixed" family with young kids travels, it's kind of obvious that we are going to visit family.

On the other hand, coming back to the US, I always get questions like
"how long were you gone?"
"Do you still work at your company?"
And I am fingerprinted and my picture is taken each time, like if I was a criminal. It's starting to bother me.
I guess it's because of my green card, where you can't leave the country for too long or you can be considered as abandoning the card.
The question about my job is kind of odd, because even if my company sponsored the green card in the first place, I am allowed to change and a green card is not conditional to working for a specific company.
Those are reasons why I might consider at some point to get US citizenship. As they can deny you entry, even with a green card, for whatever reason. They decide. That's scary. My wife tells me I am paranoid.

Right now, with all that mess and the way they're treating Americans abroad, I don't want to seek it. It's pretty sad that having a US passport is more a liability that an asset in a globalized world these days.