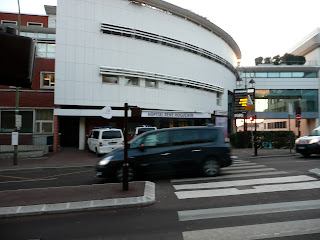 Almost there.  The last two weeks have been very difficult.  As I wrote in a previous post I am undergoing radiotherapy right now.  For those who may be wondering why, the short answer is that this petite Madame has a long-term subscription to the delights at the Rene Hugenin Cancer Center (Institut Curie) in Saint Cloud, France.  Over the past few months I've pretty much had every service they offer:  surgery, chemotherapy, and radiotherapy.  Am I a satisfied customer so far?  Well, yes, because  I'm still here.  Can't argue with that result, right?


So how has it been going?  As I suspected that radiotherapy isn't really better or worse than the chemotherapy - it's just different.  The chemo was every three weeks and had some pretty severe side effect.  The radiotherapy has fewer side effects but still makes me very tired not to mention the skin around the affected area being rather red and sore.  And unlike the chemo for the radiotherapy I have to go in every day.  For the first week or so it was pretty fast since I was only scheduled to be zapped under one machine, the Clinac 600.  But that didn't last.  My oncologist decided to add a second machine with a different dose and that has added hours to my time at the hospital.  So these days I am spending roughly 3-5 hours a day in Saint Cloud and in the clinic.  Happily it's not for much longer - the radiotherapy ends for me on December 20th.  I could not ask for a nicer Christmas present. 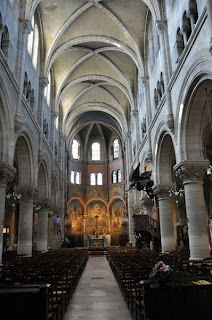 Nevertheless there have some unexpected benefits to spending more time over there.  For one thing I've had more time to visit the city of Saint Cloud which has the most amazing church, Saint Clodoald.

Three things about this church that I absolutely love:  the Chapel to Mary which has a really beautiful mosaic of angels playing various musical instruments which appeals to the violinist in me;  the request you see as you enter the church which asks that you pray for the various benefactors who over the years have contributed to the support of this particular parish - the first name on the list is Sa Majesté Marie Antoinette, a woman who may have been a bit clueless but surely did not lack for piety;  and the last a mosaic hidden on the wall of one of the chapels that pays tribute to the visit of an American bishop from St. Louis.

All this and the nave which is quite stunning.


Another benefit has been a gradual getting to know the other patients and the technicians that manage the accelerators for our daily doses.  Again teamwork is required here.  The techs have a hell of a job keeping the machines up and running and the flow of patients moving.  Over the past few weeks there have been technical problems which have meant delays of up to 2 hours.    I was under one the other day and it was taking longer than normal and so I looked up at the screen only to see something that looked suspiciously like a Windows error message.  First and I hope the only time in my life I will ever pray, "Please God, be cool and do not let this machine be managed with Microsoft software..."

As patients our job most of the time is to be patient.  Sometimes we do complain (the French are very creative "râleurs") but mostly everyone is calm and, to my surprise, quite friendly and more than happy to strike up conversations. It even gets a bit giddy from time to time.  Earlier this week we spontaneously held a "concours" in the waiting room - we whipped off our various scarves to see who had the most hair.  I didn't win but I wasn't dead last either.

And finally the last big benefit is that I get to take the train a lot from Versailles Chantiers to Saint Cloud.  I'm a huge fan of trains and I like nothing better than to hop onto a warm train, settle into a seat and watch the world go by as we clickety-clack down the tracks.  I get a lot of reading done as well some of which is pure brain candy (my beloved paranormal romances) but not all.  You might find this odd but in the face of one's possible demise the question, "How shall I live?" becomes oddly pressing and of enormous interest.

Right now I'm working my way through two books, the first of which was sent to me by family in California called Trustful Surrender to Divine Providence by the 17th century religious writer, Father Jean-Baptiste Saint-Jure, and a few words from Saint Claude de la Colombière (both French and of the Society of Jesus aka the Jesuits) all translated from the original French.  A pretty extraordinary little book.

The second is also pretty amazing, and though it comes from a different starting point from the above book, it ends up more or less in the same place with similar counsel.  It's called Stoic Serenity by Keith Seddon and it's both a self-paced course on that philosophy which has you reading excerpts from Seneca's Letters from a Stoic and the Meditations by Marcus Aurelius and a very good read all by itself since Dr. Seddon is quite a good writer.  I'll end this post with one of the quotations I've been contemplating over the past few days:


Can what has happened to you prevent you in any way from being just, high-minded, self-controlled, prudent, deliberate in your judgement, empty of deceit, self-respecting, free, or prevent you from possessing any of the qualities that, by their presence, make it possible for man's nature to come into its own.

So henceforth, in the face of every difficulty that leads you to feel distress, remember to apply this principle:  this is no misfortune, but to bear it with a noble spirit is good fortune.

Posted by Victoria FERAUGE at 10:41 AM

Not rain nor sleet nor snow can slow me down after reading this (inside humor, folks)? What a great post and mind boggling quote at the end. May take me years to understand it.
Mike

Glad to hear about the silver lining in otherwise dark clouds (must be a French equivilent to that).

Also intrigued by "paranormal romances" which I've never heard of...are these uniquely French (in French) or something else?

You write beautifully, with a sharp wit and touch of humor, about your situation. Thank you for your moving prose.

jill in Seattle
(your mom forwarded me this link)

"I'm still here" is the ultimate outcome and satisfaction measure. Good post and appreciation for what we have.

@mike, I am so looking forward to seeing you. I highly recommend Meditations - lots of good stuff in there all of which, as you so rightly said, will take years to understand.

@Rowan, so good to hear from you! How is Boston? Ah those paranormal romances are something of a worldwide phenomenon, I think. They are so far from the bodice-rippers of my youth but I find them to be great mind candy and there are some great writers out there. I'm particularly fond of Ilona Andrew's stuff as well as Kat Ruchardson and Thea Harrison . Here's a link to the RITA site page that explains the different sub-genres under "Romance."

@Jill, Thank you so much for stopping by and for your comment. I really appreciate your reading and I'm really pleased that you enjoyed the post.

Hi, Victoria. Love your updates. You should really consider writing a book! Trust and surrender, both concepts that translate to whatever we are doing in our life. We are just about to bid on a house in a tiny town in Western Massachusetts tomorrow. Keep your fingers crossed. We are not offering the gentleman what he thinks he should get... Meanwhile, thanks so much for sharing!

Thank you Victoria for sharing your journey and insights with us. You are the definition of grace.