The Little House in Porchefontaine

We received some very good news last week.  The notaire has completed the "dossier' and we will close the purchase of our little house some time next week.  The real estate agent has graciously handed over the keys so we can get started on the "travaux" (renovation work).

This is an odd little house.  It was built in 1929 and the style is rather unique.  It has a brick (not stone) facade and each brick is hand stamped with "EBD."  Tile roof like one sees in the south of France.  It has wood trim on the outside.  Two porches front and back.  And it's small - only 55 square meters on the main floor.  Looking at the houses around it, not one bears the slightest resemblance to ours.  Makes me wonder who was the architect and what was he (or she) thinking 80 odd years ago.  A friend and I went over to have a look (I wanted to pick her brain for decorating ideas) and we concluded that it looks an awful lot like a gingerbread house: 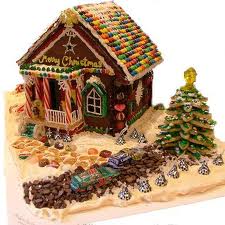 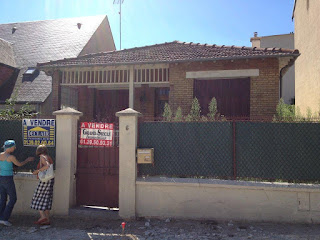 The house is so out of place and so odd compared to our neighbor's houses that we were a bit startled to discover that Versailles has some very strict zoning laws about what we can and cannot do with our precious little house.  A call to the mayor's office revealed that we can do nothing to the outside without prior permission and strict adherence to certain standards.   These can be found on the mayor's website here.

The Cahier des prescriptions architecturales for the city of Versailles is a fascinating document and an excellent read. These are the architectural standards, not for the monuments of which Versailles has an almost embarrassing abundance, but for the houses and buildings that people actually live in and own or rent.

The rules depend on the sector and the city has divided Versailles up into different zones with different rules.    For example, someone living near the rue de Montreuil who wishes to replace a roof, must follow these instructions:


In our case the rules for the "quartiers pavillionnaires" (single-family housing) apply.  These start on page 35 and the procedure to follow is quite clear - after reading the rules we must prepare a file with all the exterior work we wish to have done and we must give them photographs and plans to show how the work will impact the neighborhood.  This includes the garden and any trees we wish to plant or remove.

Lest you think that this all sounds rather draconian and bureaucratic, just remember that Versailles is one of France's biggest tourist attractions (a French Disneyland if you will).  It's also a very beautiful city with some very nice architecture and a certain harmonious style.  The rules I'm being asked to follow also engage my neighbors which is just fine by me.  The French are people (not celestial beings) and a certain percentage of them have terrible taste and are not immune to bad color choices and ugly lawn ornaments.  Just travel around France if you don't believe me - there are plenty of architectural monstrosities and really ghastly projects to see if you just get out of the main cities where such things are regulated.

So we called the mayor's office back, got the forms, took a few pictures and send our file off.  It was pretty painless because frankly we don't want to do much on the outside.  We like our odd little house as is and the changes we want to make are very minor:  putting in insulated windows in the same style as the original ones,  extending the original chimney which is too short since the houses on either side were raised to two stories, and planting a fig tree in the back garden which will match the neighbor's fig tree on the other side of the wall.

That was a few weeks ago and we were feeling pretty happy to have that out of the way and to have started the process until we received this letter in the mail from the city:

Sir,
On 25/09/2012 you submitted a request for prior approval for your project to the Mayor's office which has been received and registered under the reference number in the box above.
Since your project falls within the scope of the protection of a historic national monument and/or a protected sector, the Architect of the Buildings of France must give his agreement for the work.
The delay for receiving an answer to your request is thus TWO months....


I had to read it twice before the information registered.  They mean my little 1929 oddball gingerbread house?  Next to a national monument?  Requires authorization from the Architecte of France before it can be changed in any way or form?   Wow.  For some reason I found that rather cool.  I was however a bit confused because I didn't recall any monuments in our part of town (the cheap seats of Versailles which are about as far from the Versailles Castle as you can get) and then I had an "aha" moment:  My little house does stand pretty darn close to these: 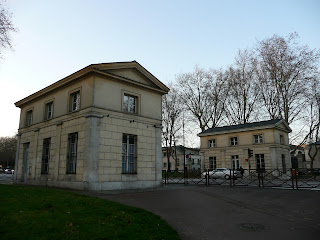 These are the Octrois de Versailles that I've already written about here and, yes, they are protected national monuments. (They are also the site of one of Versailles' "speed traps" so if you ever drive to my house, consider yourself warned.)

Posted by Victoria FERAUGE at 4:09 PM

Hearty congrats on getting the keys to your house before (!) you close on it. It is so cute, and we look forward to seeing pictures of what you do as soon as the bureaucrats let you do it!
Love
Rowan and Shirl

Hi Shirl and Rowan, And we sign TODAY! 2:30 this afternoon. When you come back around to this part of the world you have a standing invitation to come over. We can sit on the porch, drink coffee and you can give me your ideas for the garden.