The King's Stable and the Way of the Squire 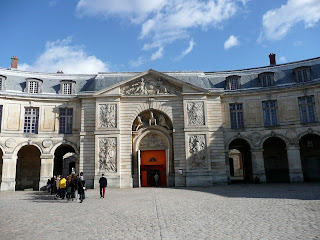 Last Sunday the younger Frenchling and I went down to the Grande Ecurie du roi (The Big Stable of the King) for a visit and a show.  This was the first time I'd ever been inside though I've passed by and admired the building many times over the past few years.

The King's Stable was built between 1678 and 1682 for two purposes:  a stable for the king's saddle horses and a training center for young people from the nobility destined to be officers in the royal army. 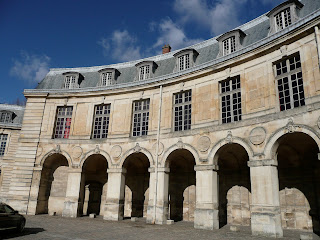 Today it is a beautifully maintained monument that still has a purpose akin to what it was in the past - it is the present home of the L'Académie du spectacle équestre (The Academy of Equestrian Arts).  I haven't ridden a horse since I was a child and never had any formal training so I can only describe what they do from my very uninformed perspective.  The show we went to was called La Voie de l’écuyer (The Way of the Squire) and it was a bit of everything - theater, ballet, a tournament, a mock battle, a dance - beautifully choreographed and accompanied by very good classical music (Baroque, I think) and words from the past.

The show began with a quotation that I did not recognize, "La tradition est la deformation d'un message du passé." (Tradition is a deformed message from the past.) and the call was to return to the origin of things to learn their real meaning and context.  The first scene was composed of three young women with longbows and they moved slowly enough so that you could see every step, every gesture before they fired at the target.  It was impressive and those bows were almost as tall as the women who were wielding them.  This was followed by the entry of one of the most beautiful horses I'd ever seen with his rider who ran him through his paces around the arena. Such amazing fluidity of movement and gaits that I didn't know horses had in them.  It was very much like watching a ballet - many of the movements seemed unnatural but oh so graceful and precise.  Beautiful to watch.
﻿
﻿ The most exciting part came in the middle of the show.  Swords.  Long and very thin - the kind you see used in modern fencing (and here I am not sure what you would call them in French - les rapières or les épées?). It started with a mock fight between two people in the middle of the arena and then in came a group of horses and their riders.  What followed was an exciting, heart in your mouth, mock battle on horseback.  They started at one end of the arena with the horses leaping forward and running like hell and the riders slashing at each other and then everyone pulling up just short of the stands.  At the very end they formed a circle around one horse ridden by a lovely young woman who tilted her body back, raised her sword in the air, and had her horse spin under her.  Faster and faster and faster. Extraordinary.

The rest of the show was just as good.  If you have children, you must bring them.  If you don't have children, go anyway. The place was packed so reserve here ahead of time.  You can visit the stables after the show to ask questions and admire the horses.  We learned that the really elegant white ones are Lusitaniens.  There were also Criollos and Quarter Horses.   A last word - both the stables and the arena were really cold.  This doesn't seem to bother the horses one bit but if you're a furless human like me, a warm coat, a hat and gloves would be a good idea.
Posted by Victoria FERAUGE at 3:42 PM